Explore the strong historic connections between Dalkeith Country Park and the town of Dalkeith during your visit. With its beautiful buildings and landscape, The Park is home to a rich tapestry of tales. However, they only tell part of the story of Dalkeith; a small town with a big history.

Dalkeith town and the country park are filled with clues that reveal their historic connections. You can enjoy a walk from The Park through the town and uncover intriguing hidden histories as you go. 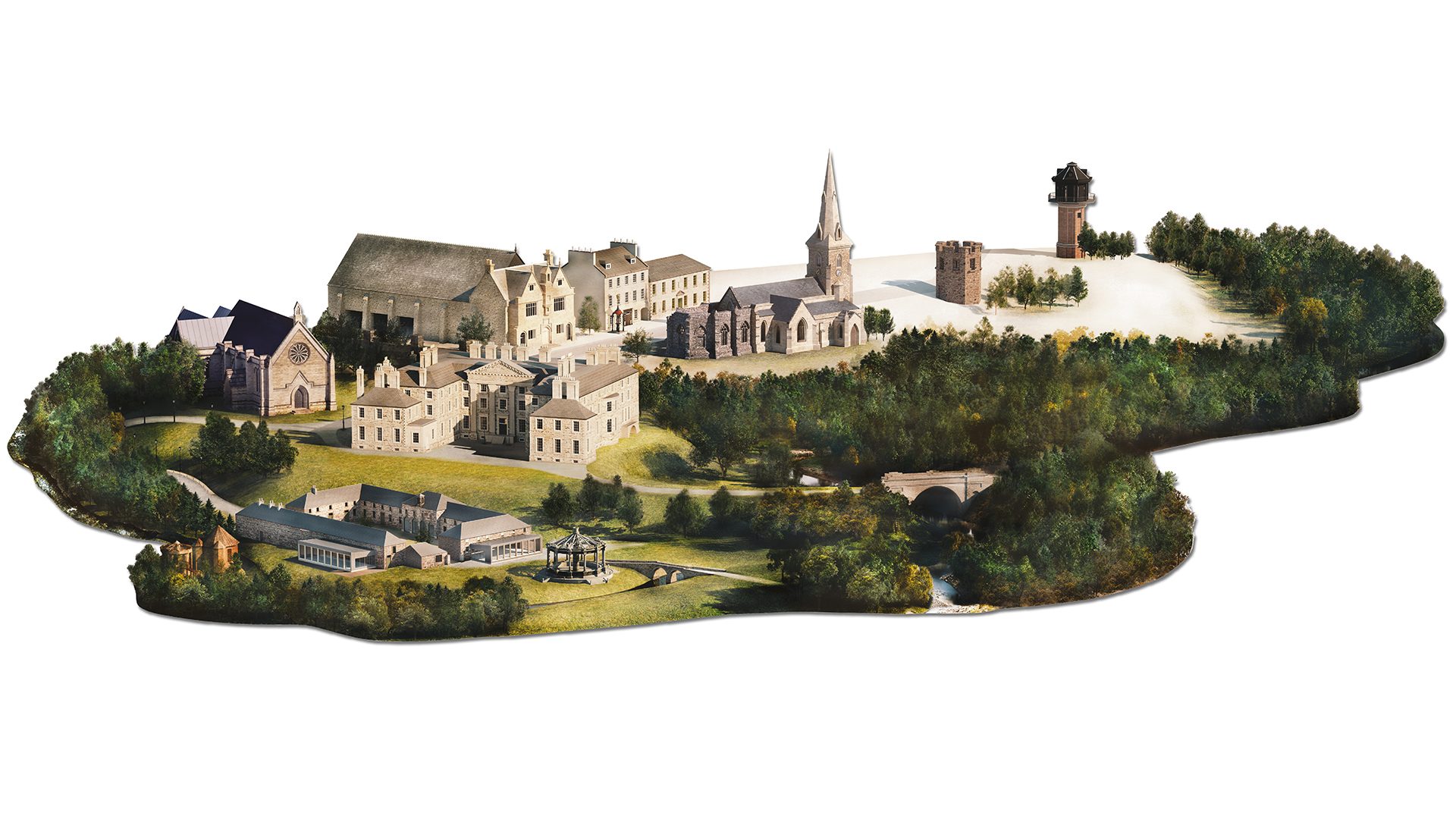 From Romans and railways to royal processions, Dalkeith town and its country park have a vibrant history. Surrounded by rich, fertile land, Dalkeith once hosted the biggest grain market in Scotland and was the site of the country’s first railway. It has played a prominent role in local government and on two occasions, Scotland was ruled from Dalkeith.

The Graham family build a castle on Dalkeith Estate and Dalkeith town is first mentioned in written records. The Douglas family inherit the estate in the 1300s and build St Nicholas Buccleuch Chapel on Dalkeith High Street.

Dalkeith becomes a ‘Burgh of Barony & Regality’ and is allowed to hold a weekly market. Sir William Douglas, Regent of Scotland, rules from Dalkeith until James VI assumes the crown. King James VI mourns the death of his mother, Mary Queen of Scots, from Dalkeith Castle in 1588.

William Douglas sells his Dalkeith estate to Francis Scott, the 2nd Earl of Buccleuch. General Monck rules Scotland from Dalkeith Castle from 1654 – 1659. In 1648/9 five women are executed in Dalkeith for witchcraft.

Dalkeith Castle is transformed into a magnificent Palace by Anna Scott, 1st Duchess of Buccleuch. The estate is used as a Jacobite camp by Bonnie Prince Charlie as he prepares to march south. By the end of this century, the town of Dalkeith has a population of 3,100.

The last public hanging takes place outside the Tolbooth and Scotland’s first railway opens to transport coal between Edinburgh and Dalkeith. A Watch Tower is built to deter body snatchers and King’s Gate is built on the Dalkeith estate to welcome King George IV.

Winston Churchill delivers a speech at the Corn Exchange and there’s an attempt by suffragettes to blow up St Mary’s Church. During both World Wars Dalkeith Palace and grounds are used by the army and Polish troops.

Few towns are better supplied with bread, butcher-meat, groceries and garden produce. We have an extensive iron foundry, a gas works, a brewery, several curriers and tanners; manufacturers of felt and beaver hats, straw hats, and woollen stuffs. The town is well-paved and lighted, and kept exceedingly clean.’

The Discover Dalkeith project has been made possible thanks to funds contributed by Midlothian Council.

Wildlife & Nature
Share this page:
Dalkeith Country Park
Close
Manage Cookie Consent
To provide the best experiences, we use technologies like cookies to store and/or access device information. Consenting to these technologies will allow us to process data such as browsing behaviour or unique IDs on this site. Not consenting or withdrawing consent, may adversely affect certain features and functions.
Manage options Manage services Manage vendors Read more about these purposes
View preferences
{title} {title} {title}